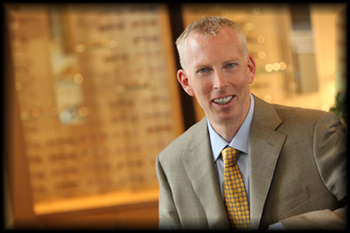 Following undergraduate study at the University of Regina, Dr. MacDonald graduated from the University of Waterloo School of Optometry in 1992, receiving the General Proficiency Medallion and the Attridge Award for Excellence in Pathology. Since that time, he has been engaged in full-scope private practice in Waterloo, with special interest in ocular and systemic disease.

Following graduation, Dr. MacDonald stayed involved with the School of Optometry, acting as a clinical supervisor in the Ocular Health Clinic, and being selected Clinician of the Year. Dr. MacDonald was elected to the Ontario Association of Optometrists Board of Directors in 1999, and served a two-year term as OAO President that ended in 2007. He then assumed a staff position as a Policy Consultant working on scope of practice expansion, and intra- and inter-professional collaboration.

In early 2010, Dr. MacDonald was elected to the Council of the College of Optometrists of Ontario. He was re-elected in 2012 and retired from Council in early 2016. Dr. MacDonald is a founding member of the Eye Health Council of Ontario (EHCO), a multidisciplinary group focused on improving the delivery of eye care to Ontarians. He has worked with the Waterloo-Wellington Local Health Integration Network Health Human Resources and Vision Strategy Task Forces, the Health Quality Ontario Glaucoma Clinical Advisory Expert Panel, and the University of Waterloo Clinical Research Ethics Board.

In 2012, Dr. MacDonald became a Fellow of the American Academy of Optometry, and now sits on their International Admittance Committee. In early 2013, he was accepted as a member of the Optometric Glaucoma Society, and in late 2015, was granted membership in the Optometric Retina Society. His research, writing, and lecturing focus on glaucoma, ophthalmic imaging, and retinal vascular disease: a number of his publications can be found here.

In 2017, Dr. MacDonald was recognized as a Distinguished Alumni of Honour as part of the School of Optometry's 50th Anniversary Celebrations, one of only eight recipients from a total of some 3000 graduates of the program. In 2018, he received the Cobean Award, the Ontario Association of Optometrists highest honour, recognizing contributions to advocacy, regulatory, and educational initiatives.

In his few non-eyeball-related hours, Derek enjoys cycling, photography, and chasing that little white ball ... usually through the trees as Karen patiently waits in the middle of the fairway.

that is second to none